The high data speeds that mobile subscribers experience with LTE can be largely attributed to its spectral efficiency, sophisticated packet scheduling for multiple users by the RAN (Radio Access Network), transmission techniques such as MIMO (Multiple-Input and Multiple-Output), and the increasing availability of Carrier Aggregation.

LTE works by optimising transport block sizes for transmission according to the radio conditions reported by a mobile device, so that they are successfully received without recourse to re-transmission, which would signify inefficient use of radio resources. If the radio conditions are poor, smaller transport blocks are configured with more redundancy bits, combined with lower order modulation such as QPSK (Quadrature Phase Shift Keying) and SISO (Single-Input and Single-Output) transmission, translating to lower throughput. Conversely, if the radio conditions are good, larger transport blocks are configured with fewer redundancy bits, combined with higher order modulation such as 64-QAM (64 Quadrature Amplitude Modulation) and MIMO transmission, translating to higher throughput.

The receiver performance requirements of a mobile device increase when 2×2 MIMO, or carrier aggregation, or both, are applied as the diagram below illustrates: 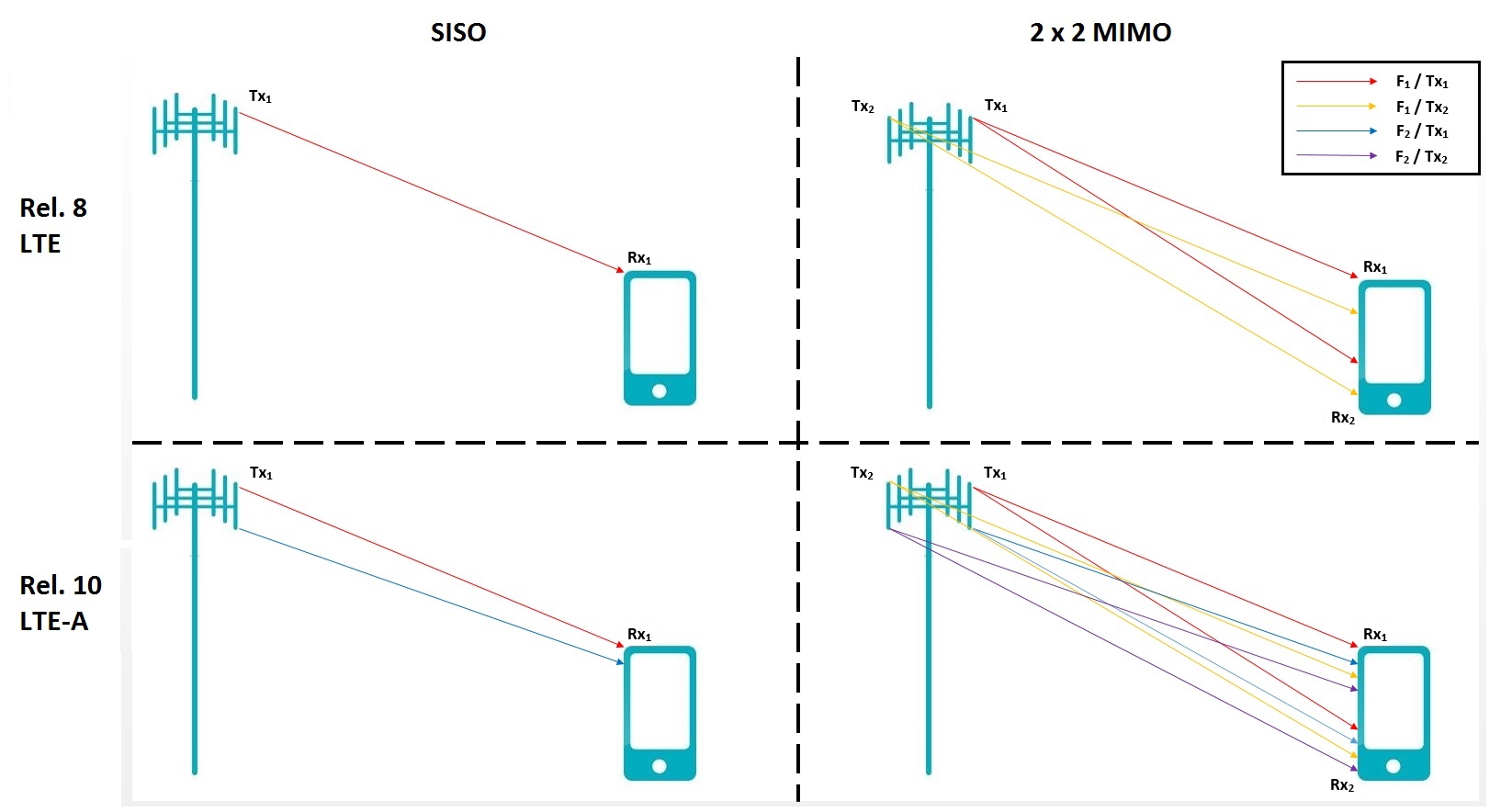 IoTAS have developed a log post-processing tool which can characterise the receiver performance of Qualcomm devices under different physical channel configurations. In an example of a benchmarking exercise, three commercial reference devices using different Qualcomm baseband chipsets were compared:

The tests were run against the Vodafone UK network on a Band 20 cell of 10 MHz bandwidth in Cambridge (Carrier Aggregation was not available.).

The charts below for the MSM8974 show CDF (Cumulative Distribution Function) curves for the instantaneous user rate determined from the transport block size during a 1 ms TTI (Transmission Time Interval) expressed in Mbps, against the CRC (Cyclic Redundancy Check) failure rate for those transport block sizes. 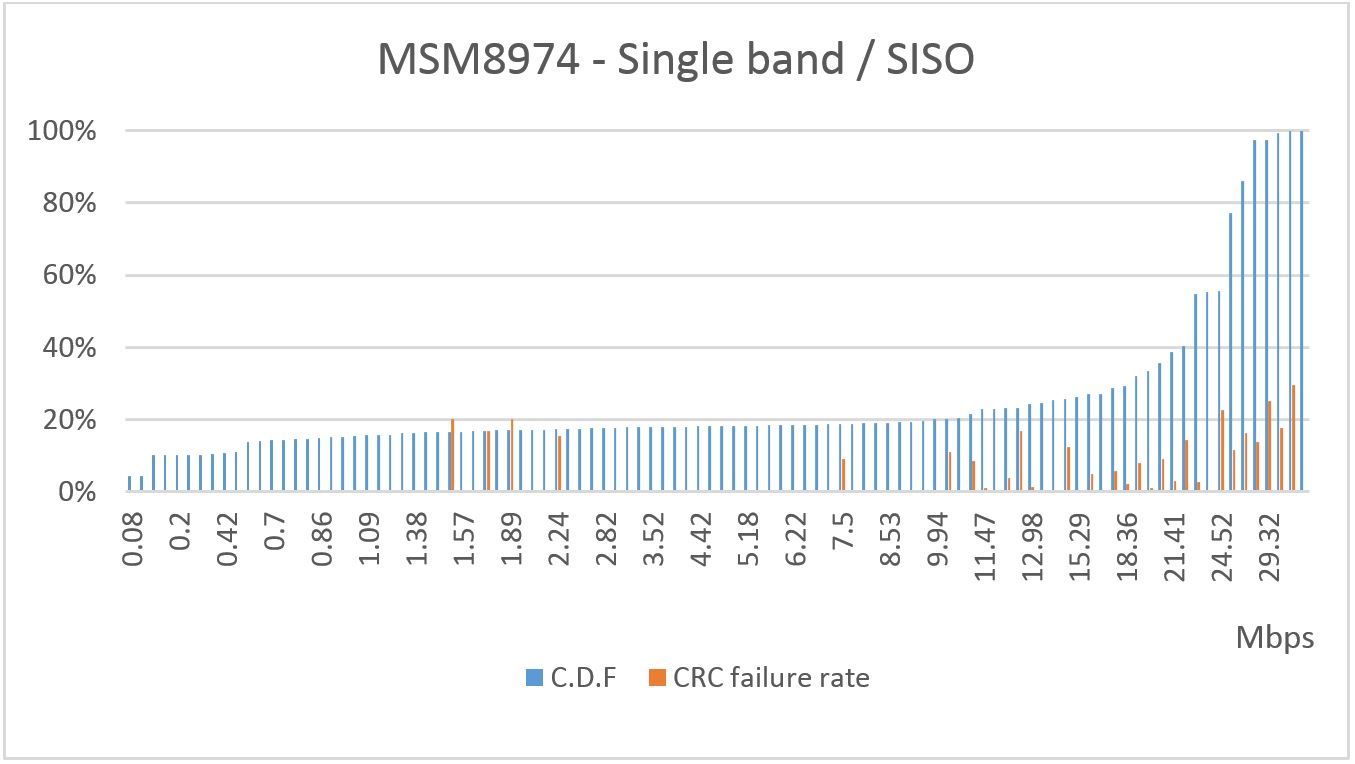 The chart for SISO shows that the peak user rate obtained was 32.88 Mbps, for which the theoretical maximum for the physical configuration is around 37.5 Mbps. Approximately 2.5% of the received transport blocks received correspond to a user rate of 29.32 Mbps or greater, and the CRC failure rate never exceeds 30%. 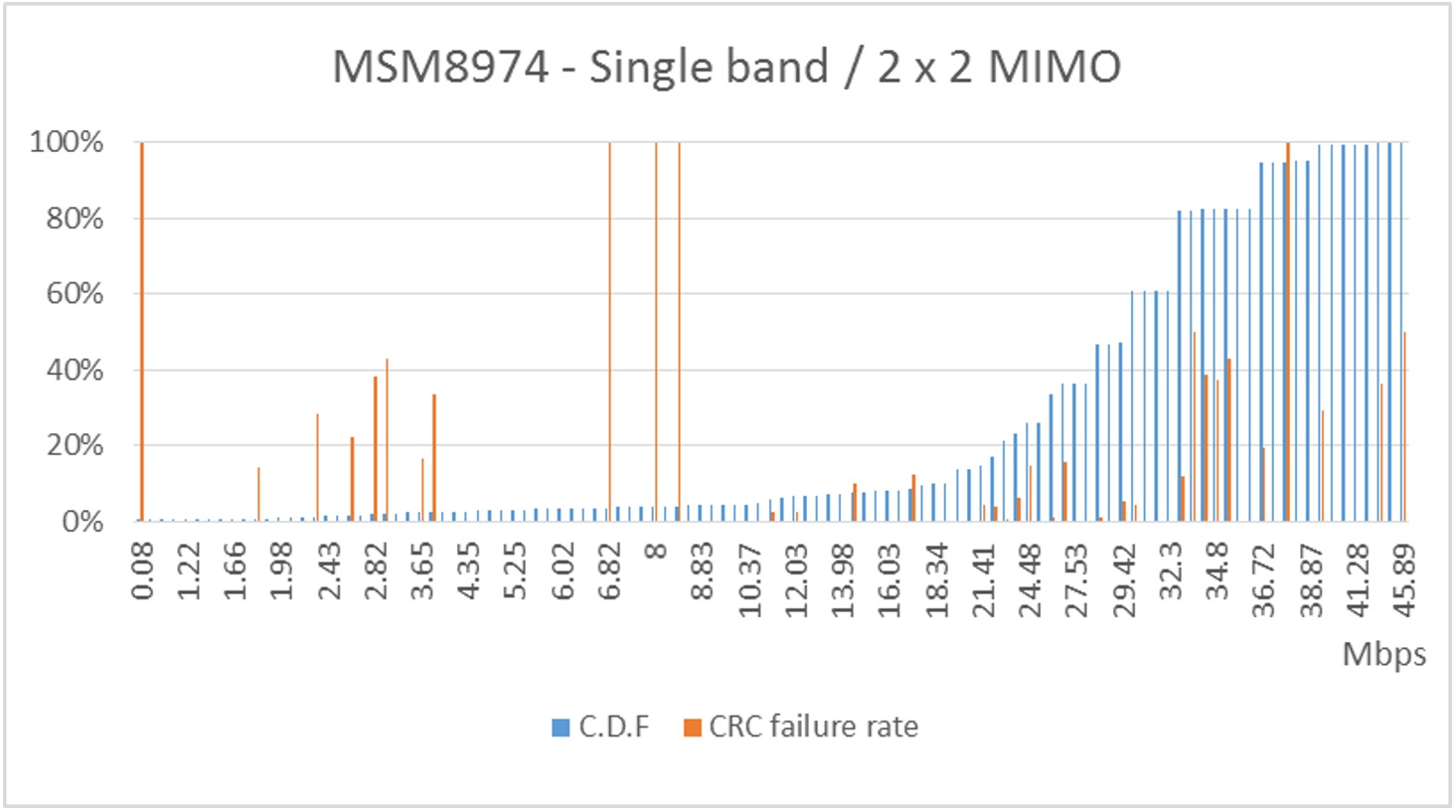 The chart for MIMO shows that the peak user rate obtained was 45.89 Mbps (the theoretical maximum would be 75 Mbps) and that approximately 5% of the received transport blocks correspond to a user rate of 37.85 Mbps or greater. There are numerous instances of the CRC failure rate exceeding 40% and a few where the rate is 100%, mostly for small transport blocks. 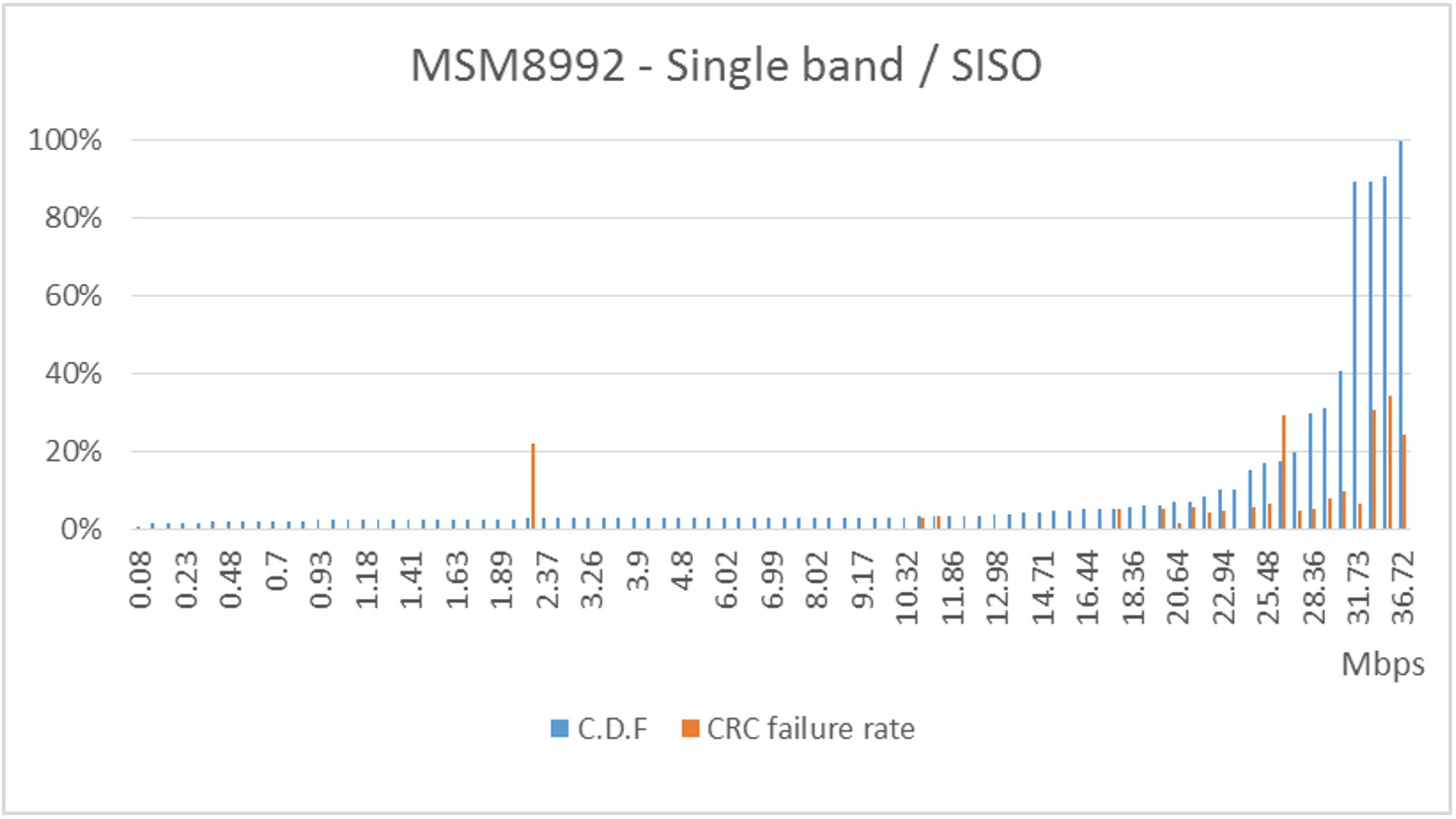 The chart for SISO shows the user rate peaking at 36.72 Mbps, just shy of the theoretical maximum of 37.5 Mbps. The shape of the CDF curve is of an ideal distribution, in which most of the samples are concentrated in the upper end: approximately 70% of the received transport blocks correspond to a user rate of 29.32 Mbps or greater. The CRC failure rate does exceed 30% in a few instances, mostly for larger transport block sizes. 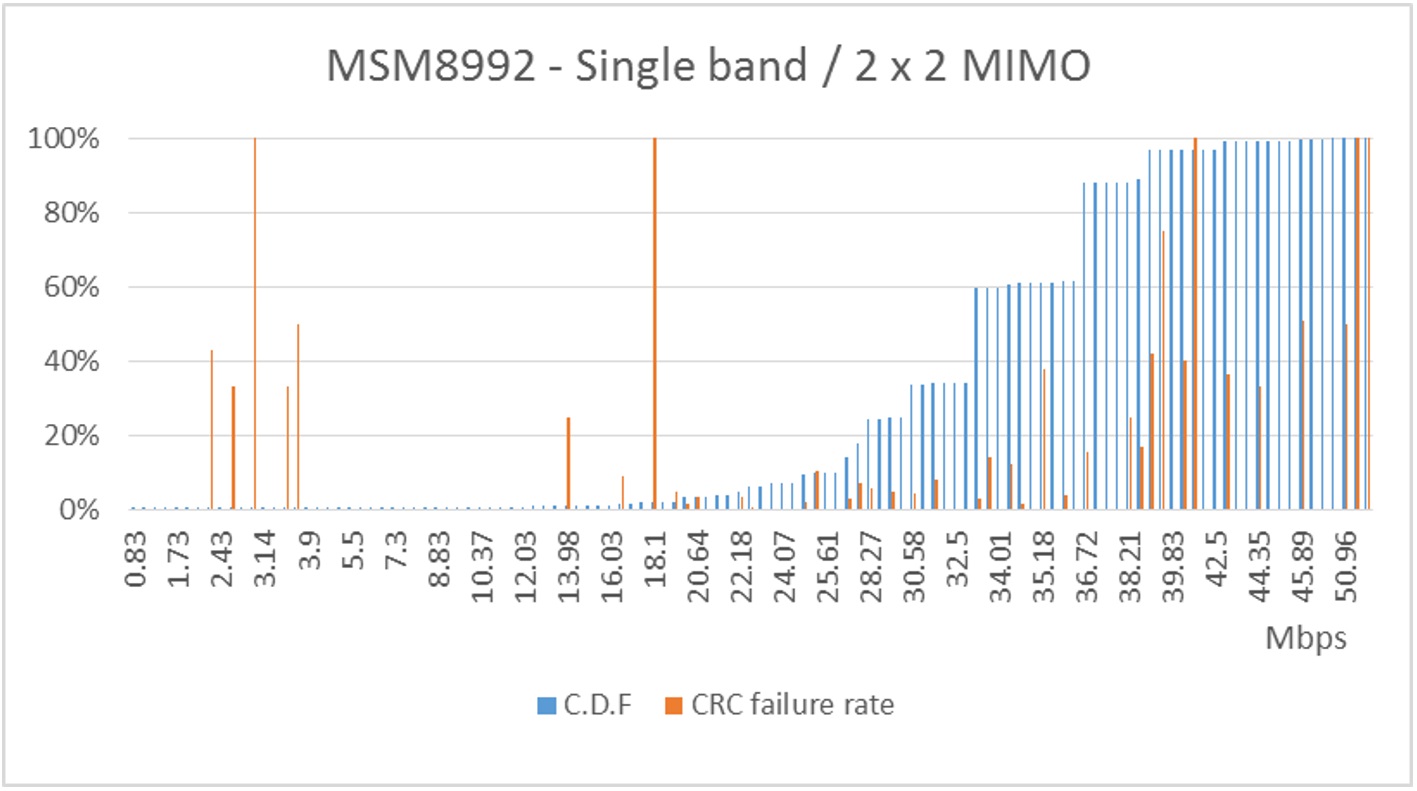 The chart for MIMO shows the user rate peaking at 54.67 Mbps (although this is likely to be a limitation due to WLAN tethering by the PC to the device). Approximately 12% of the received transport blocks correspond to a user rate of 37.85 Mbps or greater. As was seen with the MSM8974, the CRC failure rate for this physical configuration frequently exceeds 40% and sometimes reaches 100%. 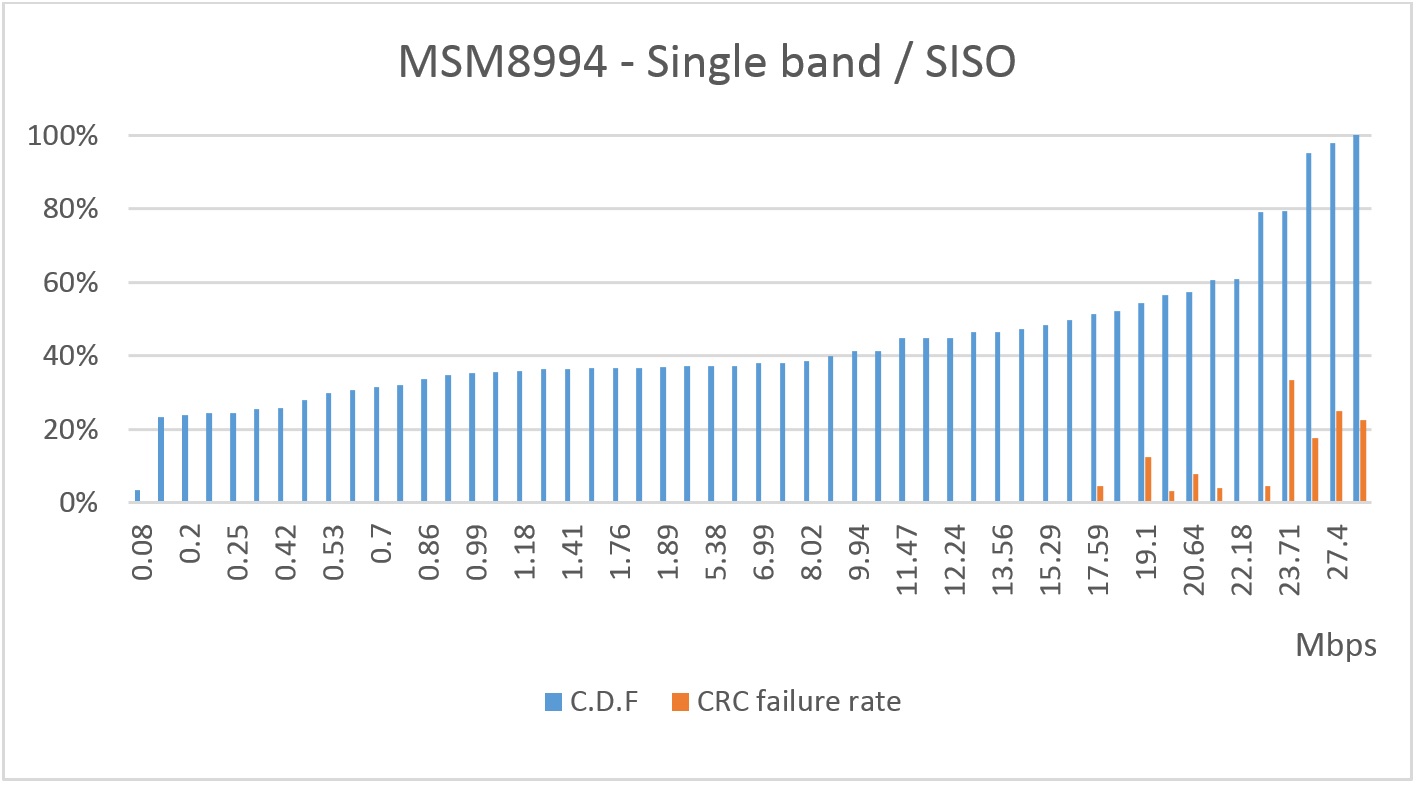 The chart for SISO shows the user rate peaking at 28.36 Mbps, comparing poorly with the MSM8974 and MSM8992 under the same conditions. More than 50% of the received transport blocks correspond to a user rate of 17.59 Mbps or less. There are a few instances of the CRC failure rate exceeding 20%. 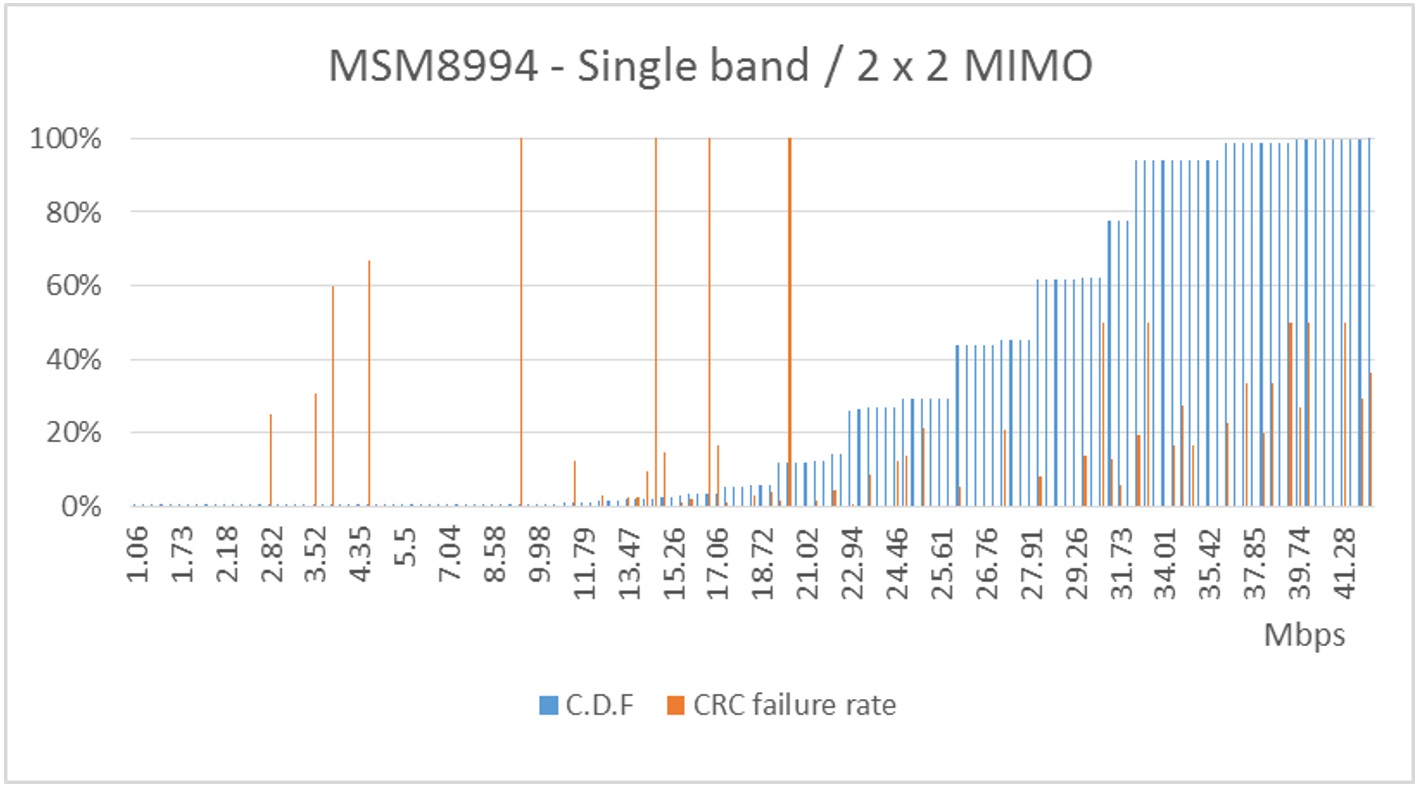 The chart for MIMO shows the user rate peaking at 45.89 Mbps (as was the case with MSM8974), although only 1.4% of the received transport blocks correspond to a user rate of 37.85 Mbps or greater. There are instances of 100% CRC failure rate, although none of these occur among the larger transport blocks received.

The CDF curves for all three devices can be combined to compare the peak rates and the distribution of the instantaneous throughput rates: 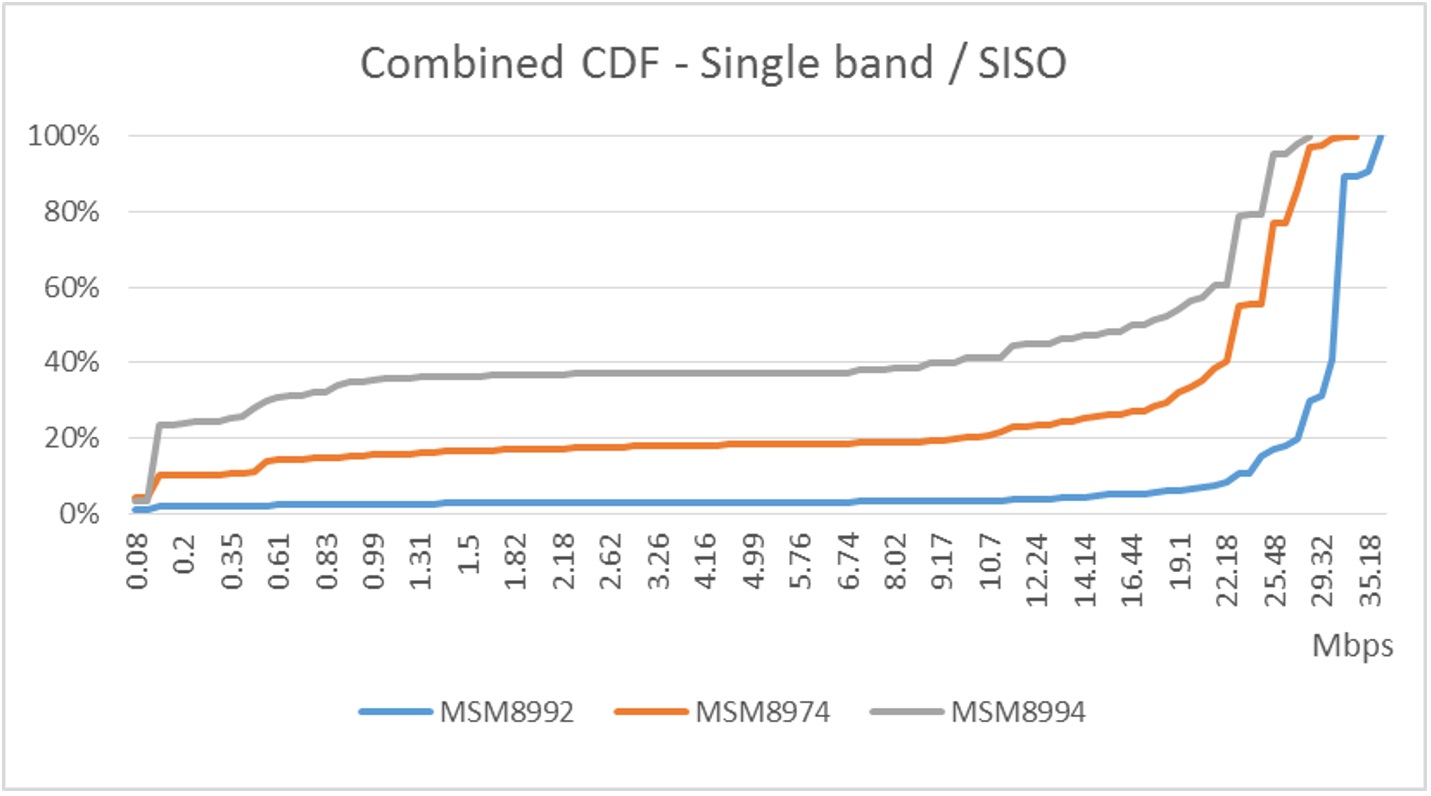 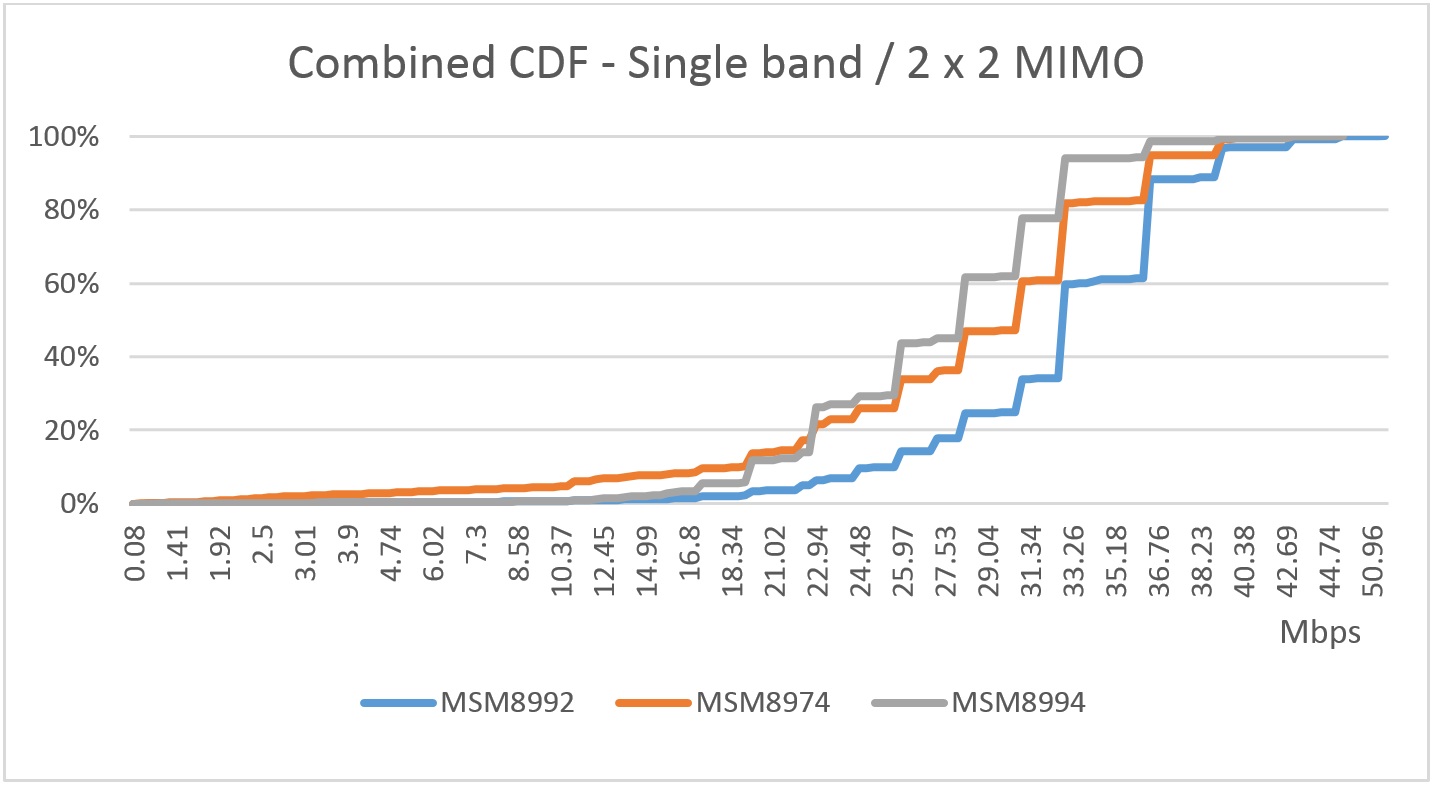 The MIMO line graph again shows clear differences in performance between the three devices, the only exception being that the devices using the MSM8974 and MSM8994 attained the same peak user rate. What is also notable is the stepped nature of the CDF “curves”, indicating that MIMO is generally being used for a discrete set of transport block sizes.

The observations previously made can be summarised in the table below:

The most striking observation is that the device using the MSM8994 – the most advanced of the three chipsets – has shown the worst performance, demonstrating how a highly capable baseband modem can be undermined by inadequate receiver performance.

For more information about LTE Performance Benchmark testing please get in touch.
CONTACT US